Corruption, a time bomb for the economic and social development of Burkina Faso 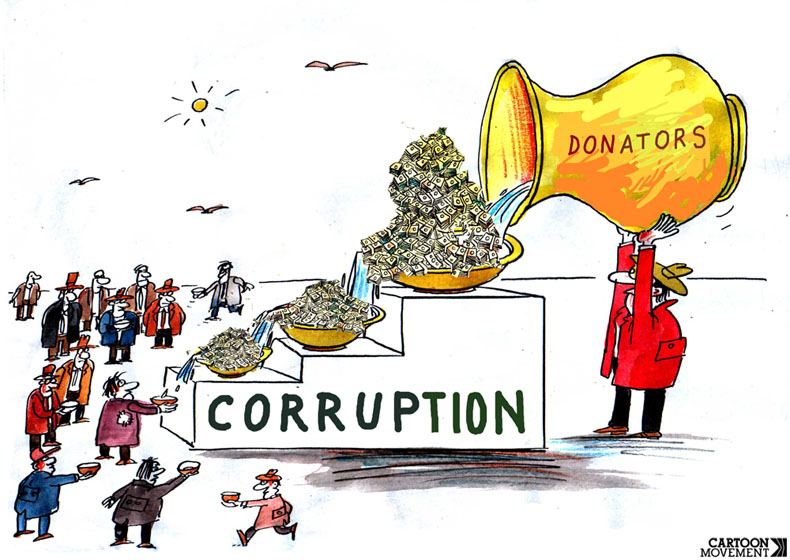 Corruption is rising on the African continent, negatively impacting all socio-economic and political levels. The rate of corruption in Africa generates poverty, unemployment, the dysfunction of economic activities. This idea is supported in the book  Corruption in Africa, according to Mbaku, J. M. (2010). Despite the advance of this enemy of progress in Africa, Burkina Faso is not spared by the rate of corruption, which is increasing day by day. #Burkina Faso, considered the country of integrity, which was able to sweep away the ideologies linked to corruption during the young Captain Thomas Sankara, is today sinking into corruption in all sectors of activity. Corruption has become the only means of illicit enrichment or quick money adopted by African countries; these countries continue to be at the top of the most corrupt countries in the world; Burkina Faso is not at the margin of this ranking of corrupt governments. According to a study conducted by the Corruption and Transparency Perception Index, Burkina Faso Corruption rank was from 85 in 2019 to 86 in 2020. Burkina has a high rate of public sector corruption with 60 points in 2020 corruption perception. Also, according to Solène Leroux (2018), Corruption in  Afrique is affecting business in Burkina Faso and is becoming a matter of concern with the rapid increase of this phenomenon; Burkina Faso is ranked as the 10th most corrupt country out of 16 ECOWAS countries with a score of 40/100 on anti-corruption surveys.

The triggers of corruption

The people who are at the root of the high rate of corruption in Burkina Faso, those who are at the head of the country,  precisely the rulers, who are adepts of #bad governance based on the embezzlement of public funds, illegal land clearing, the accumulation of ministerial posts, the trampling of the right to vote by buying votes during elections. The burkinabe leaders plunder, derobate, take money from the country; they get rich on the country’s back by leaving people in misery. According to ‌Lamine Traoré (2020), Accused of misappropriation of funds, take the case of the former Minister of Defence of Burkina Faso, Jean-Claude Bouda, who was imprisoned in the Ouagadougou prison (Maco) for fraudulently acquiring real estate because he did not declare his interests and assets when he took office.

Then the acquisition of a real estate property whose cost would be evaluated at nearly half a billion CFA francs. He could not justify such a purchase, given that he had only three years of ministerial office.

According to the Africa Tribune (2017), Economic and financial journal, the case has been the most damning corruption case since the fall of former Burkinabe president Blaise Compaoré Burkinabe presidency is pinned down to corruption affecting almost all state services. The sum of embezzlement is estimated at 31.144 billion CFA francs.

Then, in recent years, Burkina Faso has recorded a high number of embezzlement of public goods with the collaboration of current government members. According to Le Faso.net (2019), Fine coal” scandal”, there has been a fraudulent export of gold and other precious goods estimated at 335 billion CFA francs by the Burkinabe government and IAM Gold Essakane.

Corruption affects the different sectors of economic activity; even during elections, the epidemic of corruption is spread in all directions. According to Burkina Faso News corruption and electoral fraud, the ruling power uses the money to coax the population to vote for it to establish its supremacy by distributing money to voters in several localities in Burkina Faso; we also have donations in kind (21%), distribution of fuel (9%), distribution of T-shirts with or without the party logo (5%). This shows that money represents 60% of Burkina Faso’s corruption forms during the #elections. Corruption and fraud played a significant role in the outcome of the elections of November 22, 2020, in Burkina Faso. The MPP, which is the political party of the current president, represent 46.9% of cases of corruption during the elections of 2020.

Corruption is a phenomenon that has taken on increasingly worrying proportions in recent years in the country. Corruption has contaminated the entire public and private sector; the police, the Burkinabe customs are very corrupt areas linked to the redemption on the roads and borders of Burkina, based on routine controls, the payment of very high customs taxes. According to Willy SAGBE (2021), the municipal police is the most corrupt service, with a percentage of 75.21 in 2020. Finally, we have the national police, which comes in second place with 28.96%.

The causes of corruption that will lead to severe consequences

Burkina is experiencing the development of corruption, which takes the form of a loss of confidence in the state through its structures, notably the judiciary, the police, and the gendarmerie, the slowness in processing files within the public service, organised by general agents to corrupt the disadvantaged population and also the illicit enrichment of our decision-makers.

Secondly, there is a lack of control, monitoring and systematic evaluation in the public and private sectors. All these elements will have severe consequences for the State, which was once considered the country of transparency, honesty and uprightness, namely the loss of moral values, the devaluation of trust and legitimacy, political instability, the rigging of election results and the complication of political action, the refusal of international investors to undertake business, the increase in poverty and unemployment.

Transparency as a remedy against corruption

#Transparency is the principle of informing all those involved in the decision-making process by allowing the person to know the facts or figures or to have a clear idea of what was decided during the decision-making process, for example, to know the ministerial budget the country. Also, transparent governance means that the government or competent authorities act honestly, the citizens are informed of the decisions taken by the leaders or the politicians. According to Marc A (2021), Transparency in Governance is the fundamental solution to abolish corruption because it plays a crucial role in local government within the community as corruption is a brake on good governance; it also leads to misallocation of resources, detrimental to the development of the public and private sectors and misleads public policy.

Then, the only way to curb the advance of corruption is for all sectors of activity, the government and citizens to adopt the principles of transparency.

Finally, according to Marie Gay Alessandra (2020), Transparency to mitigate corruption is the key idea to dilute corruption by building on the principles of transparency.

“Should not take the phenomenon of corruption lightly because corruption is an enemy of development; let us opt for responsible behaviour to curb its advance.”

« What can we do to harness library policy and legislation to build the future of African libraries?
Guinea, one of the African Countries Facing Challenges from Climate Change »