Pre and Post untold Love Story of Arts and Politics

Behind two absolutely non-identical words, “ Arts and Politics “, there are actually two interconnected concepts that exert influence on each other . People tend to think of art separately from Politics, and surely these are two completely different worlds. Obviously, this kind of perspective is understandable considering the magnitude of their difference, be it the activities undertaken in each side, used disciplines and philosophy and theories,  stakeholders involved, some are artists and other politicians, the laws and regulations that govern arts and politics to mention a few, differences between Arts and Politics.

On the contrary, numerous relationships and intersection exist between arts and politics despite the differences mentioned above, but they are not often discussed. Sometimes it is too difficult to explain, pay attention and find the nature of things due to several things that are going on in different part of the world. It’s much easier and better to stick onto what’s standard instead of digging deeper, collecting and understanding information, drawing connections between existing Knowledge. In alignment with this observation, the best quote that suits the most, the current state of receiving and nurturing your knowledge in this context, would be the metaphorical phrase:

What if there was always something beyond those songs taught in kindergarten, baby, middle class and upper class. Funny enough,you realise that even our parents and grandparents sang these songs during their childhood. How about that one song that you know never became extinct regardless of all these past decades? Refer to that specific song that kept on existing no matter the evolution of cultures; think carefully about it.

Working in sugar, sugar and tea

When I was in America.”

That song will probably continue to exist even in the fourth industrial era and the era after it. Why are those songs conserved and preserved? Did that happen naturally or intentionally, though? meaning, are their forces ensuring the continued existence of these songs, poems, games, tails, books? A long list of artistic mediums to preserve culture, traditions, and history helps an individual grow up to experiencethe reality of his surroundings. Consider all these points like having a glimpse of the old and new generations focusing on the ordinary.

The same thing applies to art; its worth and value is typically determined by its exterior only. However, it goes beyond the clip of the song, that soft or vibrant melody, the beauty of a painting and the composition of a photo, or how entertaining the dance choreography might seem to be, the outward appearance of the singer and how fancy the actor/actress might be. Fans and followers, spectators tend to focus on the outside of the artistic work and forget about the inside of the art piece as well as the extent to which it can reach. Who Would have thought that art can be an immense component in the world of politics or a driver of the 21st-century economy?

There is no doubt whatsoever that art is diverse. The diversification of art allows people to compress information to communicate their messages, ideas in various domains, like, drawings, photos, videos. Creativity is the ultimate tool of art which enables an artist to do their magic. An artist has the ability to speak when all voices in the nation have been silenced and where fear has been instilled in the population by the rulers. They can effectively represent and speak on behalf of the oppressed worldwide. In fact, they could be perfect examples of grassroots leaders.

A quick supportive examples in the midst of lines:

The picture above comprehensibly presents a mixture of art and politics. The Author here expressed a polittical opinion “ Africans could be the masters of their own destiny” (Lyons, 2014) through a drawing, precisely in the form of a cartoon. The whole point of the love story between arts and Politics reflect Stephen Covey’s quote :

“ Strength lies in differences, not in similarities.”

Anyone would define these two as two completely different fields, as mentioned above, and even an artist career path is quite different from a politician career path. What does art have to do with politics anyway? The famous Gospel singer “ Lecrae” once made a political comment on a BLM instagram Post but added at the end, “ I know, I know, Stay in Music”. There should not be a boundary between these two sectors or regard one as an irrelevant topic toward the other, rather figure out how the relationship that has existed from the sequence of years can be reiterated.

The Pre Love story between Arts and Politics

Political instability in Nigeria has been a persistent challenge for several years. According to (Harris,2017), art can stand for highlights of injustices in a country. Plus, he said it could be used as an opportunity to tell the truth about the present times more easily, and simultaneously critique leadership systems. The late Olufela Olusegun Oludotun Ransome-Kuti, also known as “ Fela Kuti” in the music industry, was a Nigerian musician and activist. Fela Kuti invented a style of music called “ Afro Beat”.In 1969, he became influenced by different black political figures, organisation and movements, notably Malcolm X, Black Panther Party( a black American organisation), militants who inspired Kuti’s music to start embodying political messages. 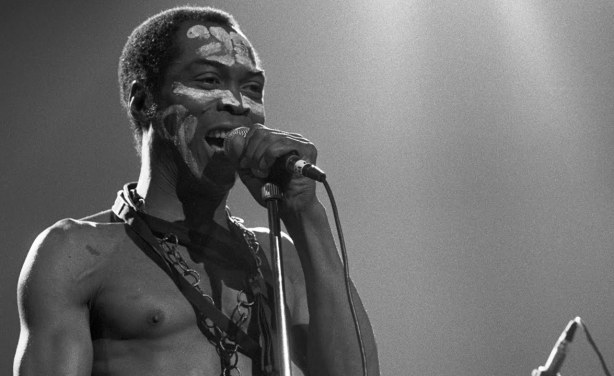 His songs emphasised the concepts of social change, “Zombie,” Monkey Banana “, “Beasts of No Nation “, and” Upside Down, “which are his most famous songs that convey messages of social change. The Nigerian’s military government would seek reasons to jail him and his band in view of the fact that they sang English and Yoruba songs for the oppressed, unemployed, unprivileged Nigerian community. Throughout his time, Fela Kuti used music as a weapon to advocate for social change in Nigeria as well as to red flag the short-comings of Nigeria’s government officials.

Zimbabwe reflecting the post Love story between Arts and Politics

Artwork could be another form of political language; otherwise, what explanations can describe the uniqueness of Kudzania artistic work.

But who is Kudzania anyway?

He is another excellent example of arts and politics in Africa, African artist and activist, also regarded as a grassroots leader. Kudzania Chiuria is a Zimbabwean artist whose masterworks explores various art dimensions to reveal the current realities of the African continent. Kudzania is identified as a multi-disciplinary contemporary African artist who creates artworks from a combination of mixed media. The use of mixed media consists of the interaction with photography, Videography drawings, film and sculpture. Moreover, the Zimbabwean artists engage with art to address the existing political, social and cultural issues in his country of origin and South Africa, whereby he reflects his personal interaction with the changes in Southern African politics, economics, and social interactions, where he lived for several years after a self-imposed exile in his homeland due to threats of violence and arrest in his home country. More about Kidzunia in his cultural activism life is centred around poetry and fashion.

Overall, Kudzania advocates for creating an attitude of awareness on issues such as democracy and Xenophobia. This can be clearly recognised through his first artworks of unflattering murals and posters criticising the Zimbabwean government.

In conclusion, art can be a political tool to map out a conflict resolution platform that entails themes of disputes and violence accompanied by approaches that people can use to resolve them. Not only focusing on issues of conflicts in the contemporary moment in Africa.There are greater possibilities of bringing arts and politics together rather than addressing them as two different topics.The realities of arts and politics are found in National anthems and liberation songs indicicating very well the art and Politics relationship , murals for instance  Silo Art in Australia is another add to this list.Some artists would even decide to root their artworks into political matters only, but because of the ideology that defines  arts and politics to be two separate practices , it limits them from trying it out.That lifestyle might seem to threathen the foundamentalism of art and political practices , at the same the probability of losing their followers and fans.

Harris, M. (2017). — In a Time of Trump. Five Ways of Seeing the Relationship Between Art and Politics. https://medium.com/@mdnharris/five-ways-of-seeing-the-relationship-between-art-and-politics-in-a-time-of-trump-568a8bb94d65

What is the difference between art and science of politics? (2021). Quora. Retrieved 2021, from https://www.quora.com/What-is-the-difference-between-art-and-science-of-politics

Okoro, E. (2016, November). A brief word on the politics of art and the African aesthetic. https://guardian.ng/art/a-brief-word-on-the-politics-of-art-and-the-african-aesthetic/

We Want To Move It Move It! The Story of Urbanization, Transportation, and Population

The Plight of Zimbabweans with Common Mental Disorders

« Youth Unemployment as a cause for Urbanisation
International Development Work: Africans Involvement, Diversity and Inclusion »