The Tale of Women’s Empowerment in Rwanda

The Tale of women empowerment in Rwanda

“Women and men are equal in terms of ability and dignity, and they should also be equal in terms of opportunities. As Rwandans, as a global community, we need every member of our society to use his or her talents to the fullest if we are ever to reach our development goals.”  His Excellency Paul KAGAME, The President of the Republic of Rwanda.

Women empowerment is a powerful term in the present society. It alludes to women women’s capacity to make the most of their privileges, opportunities, and get control over the benefits they deserve. Women should have the option to deal with their work at their own risk. Aside from being financially independent and having equivalent political rights, they hold their freedom of life. Women’s empowerment gives them the freedom to settle on their own decisions. The world should permit women to participate in essential choices at schools, at home, and wherever they stand as a part of their lives. In 2017, the World Economic Forum stated Rwanda as the fourth-best country in closing gender gaps, behind Iceland, Finland, and Norway(2017).

Rwanda is small and landlocked, hilly and fertile with a densely packed population of about 12.5 million people; according to the National Institute of Statistics of Rwanda, 52.3% of the Rwandan population are women (2018). Rwanda borders the much more enormous and decadent Democratic Republic of the Congo and its nearest East African neighbors, Tanzania, Uganda as well as Burundi. Rwanda has emerged as an impressive tale of change in Africa after the devastating 1994 genocide against the Tutsi. Today Rwanda is ranked by the World Economic Forum as the ninth-best country in closing gender gaps and the first best country in Africa (2020).

The 1994 genocide against the Tutsi left behind unprecedented contortion in social relations and exacerbated gender disparity and imbalances. However, one of the most extensive impacts of genocide is an adjustment in gender roles; the fact illustrates this, women head 25% of households in Rwanda(2014); this may be due to the fact that women live longer than men and probably also due to the genocide against the Tutsi which left more widows than widowers. The post-genocide era was also marked by women performing non-traditional positions, such as decision-making, financial resource management, household construction, and roads, with the minimum capacity to play those roles.

Education is a basic human right and an important tool to ensure the full capacity of all Rwandan people – women, men, girls and boys. From that standpoint, Rwanda was committed to ensuring that every person gets an education and ensured that most disadvantaged people, mostly girls, and women have access to education. Rwanda’s commitment to girls girls’ education led to girls girls’ education status to be improved at primary, secondary, and tertiary education. In 2014 girls in school were 64.5% in 2016 67.6%. In 2018, 79.5% (2018), the number of illiterate girls or women decreased throughout time, which is an excellent remark because no females were allowed to attend school in Rwanda’s history during the colonial period. The Rwandan society was structured in a way that women were disadvantaged in all areas compared to men.

The secret to achieving sustainable national growth is involvement by women in the economy. The Rwandan government is aware of this. It also increases the opportunities for women to participate in the economy through many processes, This involves the implementation of new enabling laws, legislation and programs to help women engage in the economic development process and to benefit from it. The law also offers equal job opportunities for women, men, children, and boys and guarantees equal remuneration for equivalent work for both women and men. Differences in economic growth, social expectations, schooling levels, fertility rates, and access to childcare and other support services are reflected. The provision of female labor is a driver and a product of growth. In response to higher labor inputs, economies expand faster as more women join the labor force. In 2016 40% of all employed people were women while 60% were men, 26% of women have been declined a job while 15.7% of men were refused; in 2018, 17.5% were declined employment while 13.5% were denied. If one is to analyze these numbers, one could say that women are still undermined, but we have to remember Rwanda’s history, which proves how the number of women in the labor force is higher. The world bank claimed that Rwanda has the highest number of female labor force participation in the world (2020).

“Gender equality in every sector is not a favor; it is your right. It is the way it should be. The right to equality is not something that can be given or taken.” -H.E. Paul Kagame.

Rwanda has moved from a country that treated women as objects, whose primary function would be to have children, to one that clearly mandates women to hold at minimum 30% of government posts.. Since 2003, the Constitution of Rwanda has allowed women to hold 30 percent of elected posts.

Women in the parliament

Today the number is 61 percent-the highest in the world, with 49 women in parliament. Women are in charge of four of the seven supreme court seats. Women have engaged in income-generating activities since 1994, which have helped to create their socio-economic empowerment, paving the way for sustainable growth. Women also played a significant role in unity and reconciliation during and after the 1994 Genocide against the Tutsi. Women have begun a movement to convince their husbands and relatives to disassociate themselves from the rebellion and return to their families peacefully. Many women have achieved this as an act of heroism because it requires risks to their own lives. To persuade the rebels to leave the insurgency, women used various tactics. One of the approaches used was to compromise and reach a peace deal with government troops. Surrender in situations where they have not fought.

As an example of their work, They created a club called unity club, UNITY CLUB It is a group created by women spouses of Government members and women Cabinet ministers as effective participants on February 28, 1996. 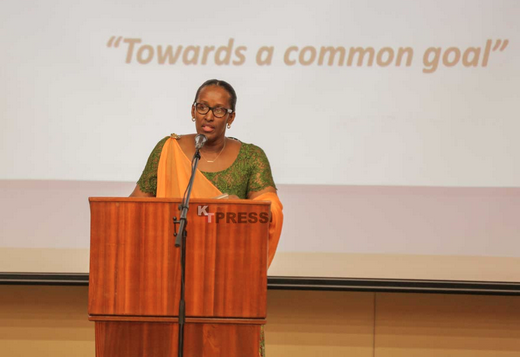 ( a photo of her excellency  first lady of Rwanda during one of Unity club activities)(Source: KT Press)

UNITY CLUB was created with the aim of promoting unity while contributing to the socio-economic development of the country that following the 1994 genocide this one of the many things women in Rwanda has been doing to own their lives.

Despite all the policies, activities, and many other things Rwanda has been doing to promote women independence there other people who are still behind, people who don’t like to see the change people who still regard women as a tool and some take advantage of women for instance in the field of work Men offer women works under one condition sex if you refuse you don’t get the job and other offer women or girls a job just for the sake of the company image.

(Both men and women in the parliament)(Xinhua/Cyril Ndegeya)

Rwanda has come a long way to reach where we are now it is up to us today’s generation to make sure that what Rwanda has achieved so far won’t go to waste and bring more awareness to people who sill want to use women as tool and people who see gender equality as a threat.

These 10 countries are closest to achieving gender equality. (2020). Retrieved 8 December 2020, from https://www.weforum.org/agenda/2019/12/gender-gap-equality-women-parity-countries/

How women are stepping up to remake Rwanda. (2020). Retrieved 9 December 2020, from https://www.nationalgeographic.com/culture/2019/10/how-women-are-remaking-rwanda-feature/

How our Ableist Society is making Women with Disabilities More Vulnerable

« The Potential of African Fashion
Is Agriculture Key to the Success of African Youth? »